His Divine Grace A.C. Bhaktivedanta Swami Prabhupada (1896-1977) is widely regarded as the foremost Vedic scholar, translator, and teacher of the modern era. He is especially respected as the world's most prominent contemporary authority on bhakti-yoga, devotional service to the Supreme Person, Krishna, as taught by the ancient Vedic writings of India. He is also the founder-acharya of the International Society for Krishna Consciousness.Srila Prabhupada, as he's known to his followers, translated and commented on over eighty volumes of the Vedas' most important sacred bhakti texts, including the Bhagavad-gita—a concise handbook for understanding the purpose and goal of human life—and the multi-volume Srimad-Bhagavatam—an epic biography of Krishna, Krishna's avatars, and His many devotees throughout the history of the universe.Srila Prabhupada's own spiritual master, Srila Bhaktisiddhanta Sarasvati Thakur, was the leading proponent of Krishna consciousness in India during the early part of the twentieth century. He specifically taught the philosophy of Chaitanya Mahaprabhu, the divine avatar who revived Krishna-bhakti all over India in the 1500s. When Srila Bhaktisiddhanta first met the young man later known as Srila Prabhupada - in Calcutta in 1922 - he urged him to preach Chaitanya Mahaprabhu's message of Krishna consciousness throughout the English-speaking world.After forty years of struggling within India to carry out his guru's order, while maintaining family and business responsibilities, Srila Prabhupada boarded a steamship bound from Calcutta to New York City in 1965. At age sixty-nine, with forty rupees and a trunk of his Bhagavatam commentaries - the first ever in English - his aim was to introduce "India's message of peace and goodwill" to the western world. During the last twelve years of his life, Srila Prabhupada would inspire thousands of Westerners and Indians to devote their lives to Krishna consciousness, launching one of the fastest-growing spiritual movements in the history of the world.Many scholars and professors who met him and became familiar with his work continue to use Srila Prabhupada's books as standard university texts, and regard him as a genuine, realized, and scholarly teacher of bhakti. His authoritative yet down-to-earth presentation of Vedas continues to inspire a worldwide audience.With the help of his students, he founded the International Society for Krishna Consciousness (ISKCON). ISKCON is popularly known as the "Hare Krishna" movement, due to its members' widespread practice of chanting the Hare Krishna mantra in public. Srila Prabhupada intended ISKCON to facilitate the association and education of bhakti-yoga practitioners, and his followers continue to spread that mission.

ISKCON Chennai is located off the East Coast Road at the Hare Krishna land, Sholinganallur. The deities worshipped in the temple include those of Radha Krishna Lalita Vishaka, Jagannath Baladev Subhadra, and Sri Sri Nitai Gauranga.ISKCON has more than 500 centers all over the world. The Chennai chapter of ISKCON inaugurated the present gorgeous temple at Sholinganallur on April 26, 2012. It has a lot of unique features. Find the chakras that line the body of the temple-purusha on the steps, see the avatars of the Lord governing the eight directions in attractive glass paintings and more!Spread over an area of over 1.5 acres, the temple is constructed on five levels. There is a 7,000 sq ft temple hall on the first floor, an auditorium for cultural and spiritual programmes on the ground floor and a prasadam hall in the basement.In the temple hall, there are three teak-wood altars which house the deities of Lord Krishna with His consort Radharani and their assisting friends Lalita and Vishaka, Lord Chaitanya with Lord Nityananda and Lord Jagannath, Baladeva and Subhadra. These deities have been sourced from Jaipur and Orissa. Designed under the guidance of His Holiness Bhanu Swami, the temple has imbibed various attributes from Vedic scripture and is inspired by the Pallava and Kalinga architecture.The entrance to the temple is marked by the representation of the universe or the bhu-mandala on the marble floor. According to the cosmology of ancient Vedic puranas, the universe is described as series of circular islands surrounding a central pillar called Mount Meru. The design on the floor at the entrance depicts the same universal pattern. There is also a life-like statue of a cow feeding its calf at the portico.The primary purpose of the temple to transform the material self-centred identity into a spiritual identity of unconditional love is graphically represented by means of a magnificent chandelier that projects various colours on the walls and ceiling. The chandelier has 500 Himalayan quartz crystals supposedly meant to intensify the spiritual energy in the temple.The temple also visually displays various vastu shastra features. 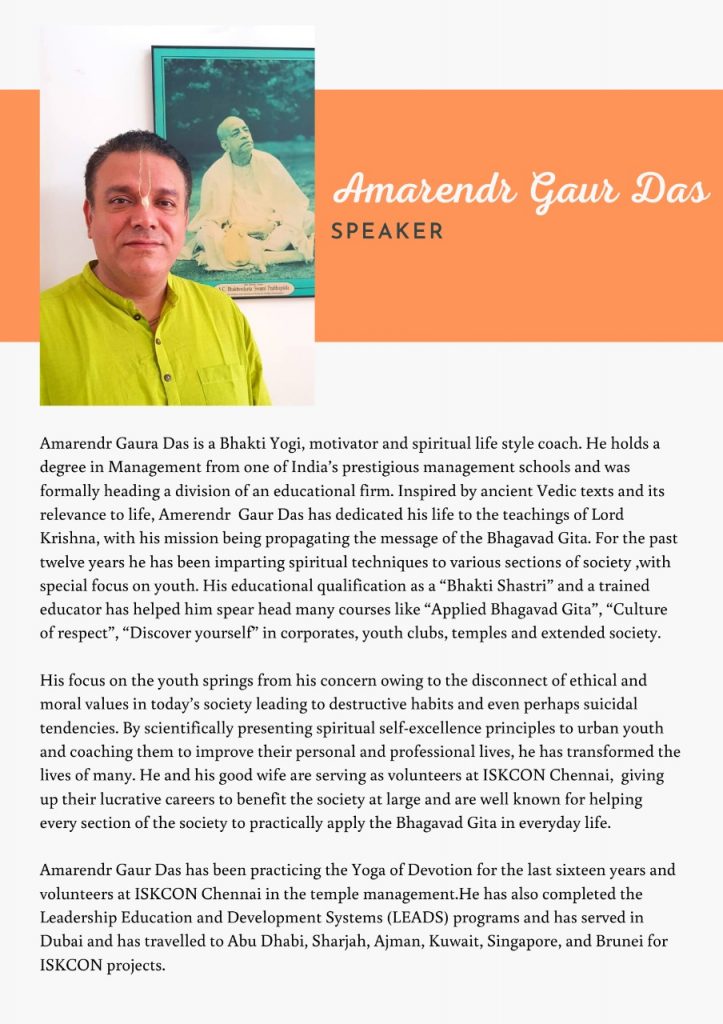 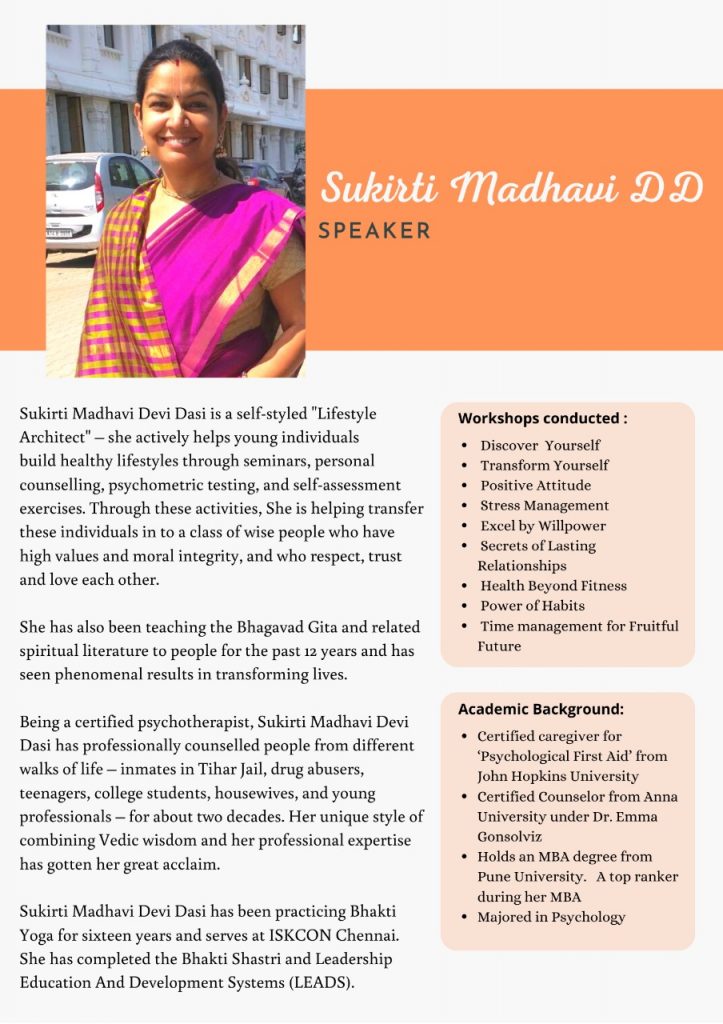